“Catania is Sicily’s most vibrant city, the modern, forward-looking sister to traditional Palermo. Its stone buildings are dramatic against the blue skies, its piazzas and boulevards are wide and inviting and, come night time, the streets are full of students having fun at the zillion bars and clubs” –

The city is also the trading capital of Sicily, the major airport, commercial and manufacturing center. It arises under the biggest volcano of Europe the “Mount Etna”. Its fortunate geographical position in one of the most beautiful parts of the world allows one to enjoy a healthy mild climate and a clear blue sea all year round, favoring outdoor life and offering a quiterhythm of life which is both pleasant and stimulating.

Catania contains numerous architectural remains of ancient times, including the ruins of Greek and Roman theaters and also Roman baths. Also here are a cathedral (founded 11th century) and Ursino Castle (13th century). The University of Catania (1443), that is one of the first universities established in Europe.

Browse our daytips in Catania

Catania’s Sights- where to go!


Catania’s Cathedral was built in the 12th century and then was entirely rebuilt in 17th century after the earthquake and the eruption destroyed most of the city. The Chapel of Saint Agata is inside the Cathedral and contains precious treasures.

This is thought to be one of Catania’s most beautiful churches. It has a splendid dome enclosed in a polygonal open gallery and its interior is full of marble decoration and a golden-bronze altar. The church was built in the first half of the eighteenth century by Vaccarini.

The Benedictine Monastery, one of the largest in Europe, is more like a palace than a religious building, its gorgeous aspect is probably due to the close links between Benedictine monks and Catania’s aristocracy. In the 18th century it was one of the most important cultural centres in Sicily, attracting many visitors amazed by the luxury and the pomp of the building. It now hosts the Faculty of Letters and Philosophy of Catania University.


This imposing religious building, next to the Monastery, dates back to the end of the seventeenth century and is still partly unfinished. San Nicolò l’Arena was built modeled on the basilicas in Rome, following the wishes of the Benedictine monks. The interior of the church is almost totally bare.

A selection of the most important places to visit

This Avenue is a true triumph of 18th century Baroque style, one of the most charming


This is the heart of Catania, with the city’s symbol monument: the fountain with the Elephant. The city’s cathedral with the Chapel of Saint Agata looks out onto this square, where precious treasures are kept. There is also Palazzo degli Elefanti which is the City Hall. One of Catania’s most interesting roads starts from Piazza Duomo – Via Etnea, where there are splendid Baroque buildings with lava dust façades and a multitude of shops and confectioners.


The Elephant, symbol of the city since 1200, is in Duomo Square. This is a lava-stone statue that dates back to the Roman era, mounted on a modern structure carved by Vaccarini in the 18th century. According to the legend, this animal became the city’s symbol because pigmy elephants lived in this place and protected people by chasing away fierce animals.


This fortress is the only medieval building survived the earthquake and the eruption in 17th century and it is today still almost intact. It was built around 1240 to protect the city from the sea and was used as royal residence and then as prison. It hosts the Civic Museum since 1934 and contains paintings, sculptures, bronzes and ceramics from various eras.

most famous opera: the “Norma”. Its style reminds the Opera House in Paris: it is a large theater with four tiers anda gallery, there are lots of wrought iron in the portico and several corridors and frescoed ceilings.


Catania theater tradition has ancient roots and is part and parcel of the city’s culture: there are about 25 active theaters in the city, each one specialized in a particular type of show, the puppet theater, the opera, ballet, Greek tragedy, classical theater and experimental theater. The most famous theater is the Bellini Theater, which was opened in 1890 with the famous opera the “Norma” by Bellini. There are also the Metropolitan, the Verga, the Musco, the “Teatro Club”, the “Piccolo Teatro”, the “Nuovo Teatro”, the “Teatro della Città”, the “Piscator”, the “Teatro degli Specchi”, the “Teatro Stabile dell’Opera dei Pupi” and many other theaters.


This museum, opened in 1994, contains about 1500 graphic works by the artist Emilio Greco: engravings, lithographs and etchings, including the famous “Commiati”.


This 18th century palace situated in Via Sant’Anna, was the home of Giovanni Verga during the last twenty years of his life. The house shows many objects belonged to the famous writer. The library is extremely valuable, it contains almost 3000 volumes by various authors, such as Deledda, Tolstoy, Gorky, Flaubert and Dumas.


This is the house where the famous composer lived before he moved to Naples. The museum is spread over a route that shows the private and artistic life of Vincenzo Bellini. Inside the museum there are also some very interesting, original musical manuscripts signed by the artist.

The wonderful Palazzo Biscari, one of the most beautiful buildings of the city, was the residence of Prince Biscari. Its halls are full of frescoes, galleries, archaeological finds, statues, marbles and other artistic wonders.

The city’s most important religious festival 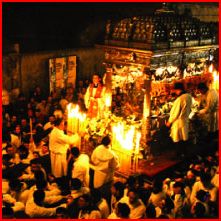 The first day is dedicated to the offering of candles, each confraternity offers a huge “candelora” that is carried in the procession with difficulty due to its weight: some “candelore” weigh up to 1200 kilograms each!

This first day ends with a fireworks display in Piazza Duomo.

On the second day, Catania’s inhabitants wear long white tunics to remember the historical night of 1126. At that time people left their houses in their nightshirts to meet two citizens who come back from Constantinople with the Saint’s relics. The celebration continues with a procession carrying the statue of Saint Agata, decorated with all the wonderful treasures offered in the centuries by kings, emperors and citizens.

The procession lasts all days and passes by all the places in the city that are linked to the saint’s martyrdom. It ends late at night, when the procession statue (called the fercolo) returns to the Cathedral. On the last day, white carnations replace the red ones used on the previous day, that symbolize the saint’s martyrdom. The most emotion-filled moment is when the procession passes along Via di San Giuliano: this steep road is considered to be a trial of courage for the Saint’s followers. Once this procession has finished and the “fercolo” is returned to the Cathedral, the festival ends with a fireworks display, that leaves the Catania people exhausted but happy for having celebrated their patron saint.